How to remove Chlorine from drinking water

Why you should remove chlorine from your water

Many household now use water purifying systems to filter their tap water before use. Why is this necessary? It’s become a popular addition to many homes because of the concern about chlorinated water and the possible negative effects it can have on health. While chlorinated water is nothing new; it is common in many parts of the world, the need to remove chlorine particles or residue from drinking water and water used for cleaning our bodies has now been firmly established as being beneficial in the long term.

Why is water chlorinated?

Public water supplies have been delivering chlorinated water for many years now in various parts of the world. The process of chlorinating water supplies began in the early 20th century as a means of combating water-borne health risks such as cholera and also typhoid bacteria, among others. Treating water with chlorine was successful in reducing these common sources of illness. However, it gave rise to a new set of health problems which research has now shown to be related to the chlorinating of water.

These new health risks included cancer and heart disease which spurned people on to find a quick, easy and yet effective method to remove chlorine content in the water after it arrived at their home from the public water supply system. A number of different methods have been established over the years, some more successful than other, depending on the amount of chlorine present in the water supply.

How to remove chlorine from your water

Here are 5 ways you can go about purifying your own water to remove chlorine that may be present:

1. In some cases the water supplied by authorities has so much chlorine present it can appear to be cloudy or white. It can seem like there are puffs of smoke coming out of the tap in severe cases. This is due to the presence of chlorine – and a good reason to remove chlorine as much as possible before using the water. A water filtration system based on reverse osmosis and designed to treat the whole house is the best solution to remove chlorine in cases like this where there is a lot of chlorine in the water coming out of your tap.

2. In cases where the chlorine level is not so high, you can remove chlorine from the water by using a water filtration system which can be attached directly to the taps where water is run from. There are also options to install water pitchers which include an integral filter to purify the water before using it. Another possible solution is an in-line based water filtering system which is connected in-line with the water supply and can be located in the kitchen area. 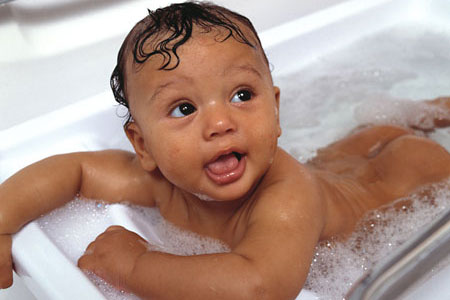 4. An extremely environmentally friendly method can be used which involves piping the water into a large glass container, which is then left out in the natural sunlight for several hours to remove chlorine particles and residue which may be present.

5. It is not only drinking water that poses a health risk. Chlorinated water can produce skin allergies and deposit toxins on skin during showering or bathing.

Installing a specialized water filter onto the showerhead or tap used in the bathroom can help remove chlorine from water used for bathing and showering. While chlorinated water has been successful in eliminating certain historic health risks, there is no doubt that it is beneficial to remove chlorine from daily drinking water and water used for baths and showers to avoid any long term negative health problems associated with chlorine content in water.